BAPTISMAL FONT WITH THE OLDEST COAT OF ARMS OF OPOLE 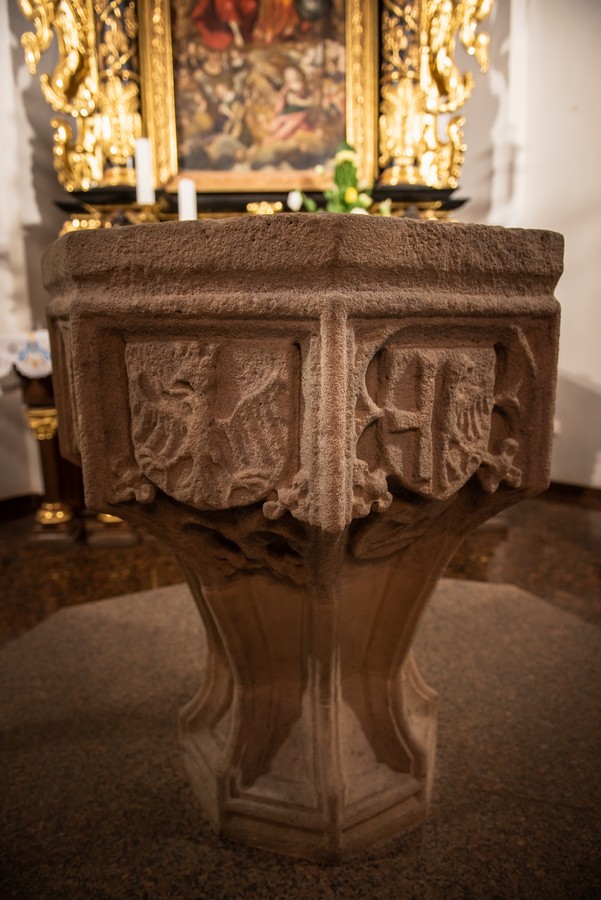 The massive and octagonal gothic baptismal font, which you see in front of you is a unique historical treasure within the Opole Cathedral due to its age. It is the oldest baptismal font in the city, and one of the most precious treasures of the stone-cutting art in the Upper Silesia. It is composed of sandstone and limestone, and it dates back to the XVth century.

It is a numb witness of history, serving as the one who accepted the following generations of residents of the Opole area as the catholic church members. It is worth to mention that as early as the first half of the XXth century, the Opole collegiate church became a parish church for not only Opole residents but also for a dozen or so nearby towns.

There are two coats of arms on the baptismal font calotte: the coat of arms of the Duchy of Opole and Racibórz, as well as the coat of arms of Opole. It is undoubtedly the oldest image of the city coat of arms. It depicts a half of the Piast eagle - referring to Opole rulers, as well as half of the cross, referring to the Holy Cross relics in which the Opole cathedral is famous for. Below there is a house mark of the stone-cutter. It is a proof of the generosity of the Dutch Jan the Good, the last member of the Opole Piast dynasty.

Not that long ago, the historic baptismal font was standing near the entrance of the Opole Cathedral in the chapel of the Saint John of Nepomuk. During the renovation of the chapel, the stone antique was moved by the main altar to the northern nave. Today, it stands in front of the Holy Trinity Altar. Here, it exists to serve the next generations of those who become members of the Christian community through the Grace of Baptism.

It is worth to mention that at some point, this historic gem disappeared from the Opole cathedral…

In 1850, due to its bad condition, a decision was made to remove the baptismal font from the temple. It was replaced with a new neo-gothic marble one created in 1849. During this time, the old baptismal font was placed and forgotten about in the parish garden.

It had been there for decades before it was accidentally found in 1963 during cleaning and renovation work taking place before the celebration commemorating the millennium of the Christianization of Poland.

In 1966, after a thorough renovation, the baptismal font came back to the cathedral. Initially, it was placed in the basement of the northern tower. In 2009 it underwent further renovation, restoring its original beauty. Today, it is a treat for the eyes of not only followers but also for numerous tourists and … historians.