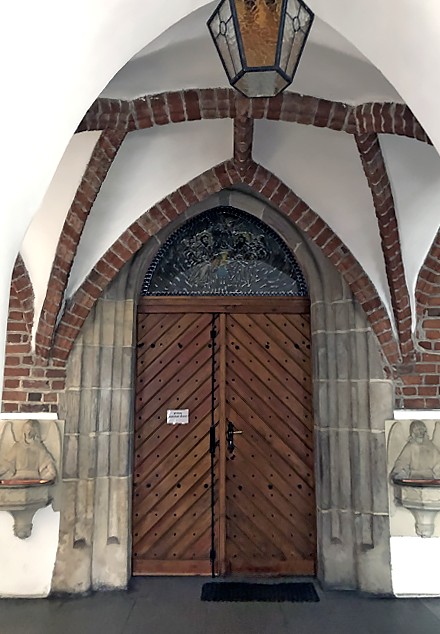 Opole Cathedral of the Holy Cross, like many historic temples, shows signs of different epochs. The front elevation, together with the tapered towers both feature prominent gothic architecture. Inside, looking at the ambo, we can find remnants of Roman style; elements of baroque and classicism. The sandstone portal in which we are standing at, is one of the many elements within the temple containing a variety of architectural styles, which were used in the walls of the Opole Cathedral.

There is an undoubtable presence of many Roman architectural features, however it’s Gothic leanness also contributes to attracting attention. To some, this is a portal from the Late Roman period, for others it comes from the Early Gothic era. Nowadays, it is a side entrance leading to the Cathedral from the South. It is a kind of time gate, from a distant past.

In order to see the portal you need to enter through the massive entrance hall door. Outside of the Cathedral, above the door, there is a tympanum designed by an Opole artist named Adolf Panitza. The tympanum depicts Virgin Mary nestling the infant of Jesus Christ, and John Paul II, who crowned the Our Lady of Opole painting. Have you missed the tympanum? You must take a few steps back. It is definitely worth your attention!

The South entrance hall leading through the portal to the Cathedral is topped with a groin vault raised on two oval pillars. Anyone who passes it will get inside the Opole Cathedral.

But before you take a few steps, pay attention to the noticeable and quite irregular grooves present along the portal. According to the researchers, they were made by knights who received a penance from their clergymen, and as a result had to restrain from fencing. To show the sorrow for their sins, they blunted their swords grooving the lines in the stone portal. This symbolized their vulnerability. They fulfilled God’s will by restraining an attack on others.

Have a look at the location of the portal. The experts say that it is oriented to the North, not to the East.

In church architecture, orientation is an arrangement by which the interior point of main interest lies towards the East. This corresponds to the belief that Christ's Second Coming would be coming from that direction. It is one of the signs that may suggest that the orientation of the original church, built by Bolesław I the Brave, was completely different than the orientation of the modern Cathedral.

In order to confirm that, it would be necessary to examine the foundations and the walls of the temple. But it is an undertaking which is too expensive to carry out. It is very probable, though, that at the Early Gothic portal, we are standing at, is the entrance to the Late Roman temple which was developed into the Gothic style we see today. The space is full of amazing and beautiful places that tell a unique story about the church and the city.