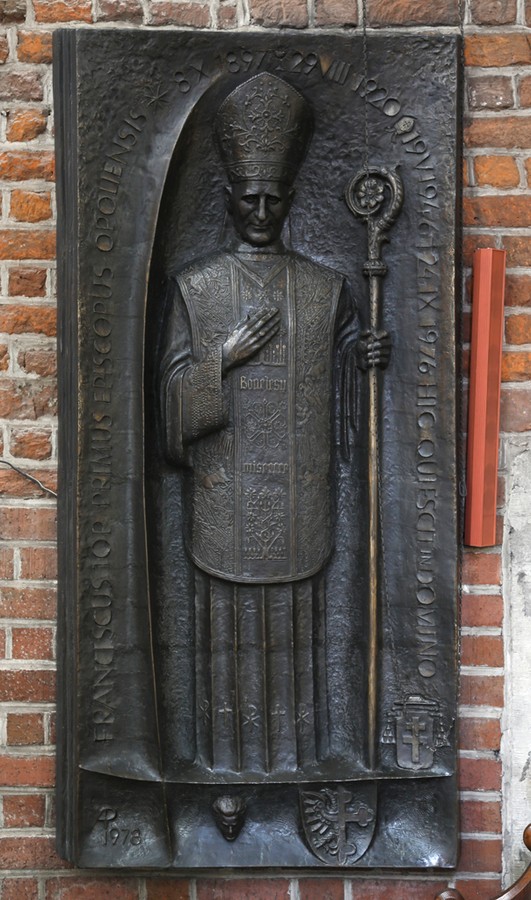 When he wanted to confess, he stood in a line to the confessional together with other followers despite the high church gentility. At the barber shop, he always waited for his turn. For many years he drove a P70 car, which is a predecessor of Trabant. He spent such a minimal amount of the churches resources on food and shoes for himself, that the nuns dealing with the supply had to try hard to occasionally buy him something of good quality.

There are many examples and stories about the modest and simple life of Francis Jop, the first bishop of the Opole diocese.  Some of them were told by Karol Wojtyła, the Cracow metropolitan of that time and later by Pope John Paul II (during a sermon delivered at Bishop Jop’s funeral in September 1976). The funeral was also attended by Stefan Wyszyński, the primate of Poland during the time. The ordinary’s remains were laid down in the crypt we are standing at. The entrance to the crypt is in front of the altar with The Lady of Opole painting.

Bishop Jop came from the Świętokrzyskie region. Before he arrived in Opole, he was an auxiliary bishop in Sandomierz, and a vicar capitular of Cracow archdiocese. In 1951, he was appointed as governor of the Wrocław archdiocese, seated in Opole for the first time. He couldn’t accept this position then due to the objection of Communist authorities.

Finally, he received the decree of appointment in 1956 and he became the first ordinary of the Opole diocese after its setup in 1972. The clergymen and the followers from our region were reserved about his appointment. Bishop Jop felt the same way. However, it wasn’t long before he won over the residents Opole region. He respected all the residents of Opole diocese regardless of their place of origin. He understood multiculturalism, and the complicated history of the region.

During his service, he took part in all the sessions of the Second Vatican Council, and coordinated the after-council canonical reforms in Poland. He developed the cult of Saint Jacek, who was born near Opole, in Kamień Śląski. He was famous for his hard work and frankness. He always spoke to everyone who needed to talk to him. No matter what time of the day it was or if the person was a clergyman or layman. Undoubtedly, he is one of the most honored figures of the Opole church.

The crypt where the coffin with bishop Francis Jop’s body was placed in was opened and examined with the use of modern technology, forty years after his death in 2016. It is one of four crypts under the floor of the Opole collegiate church that have been carefully examined so far. Certainly, they are not the only underground spaces under the Cathedral, there may be many more.

On the recent occasion of the 800th anniversary of the city of Opole, examinations of other crypts took place, led by priest Waldemar Klinger, the current parish priest of the Opole Cathedral. He came up with an idea to create an educational trail accessible to visitors. Thanks to that, the Opole Collegiate church would be one of the few temples in Poland that shows its underworld. It could become an awesome tourist attraction!

However, before the trail comes to existence, we would like to remind you of the bishop Jop whose epitaph we are looking at. It is worth mentioning that the epitaph was made by an Opole sculptor Adolf Panitz. He was also an author of the amazing, monumental and bronze cathedral door. Spend a while to take a closer look at it and see how many tales it hides.