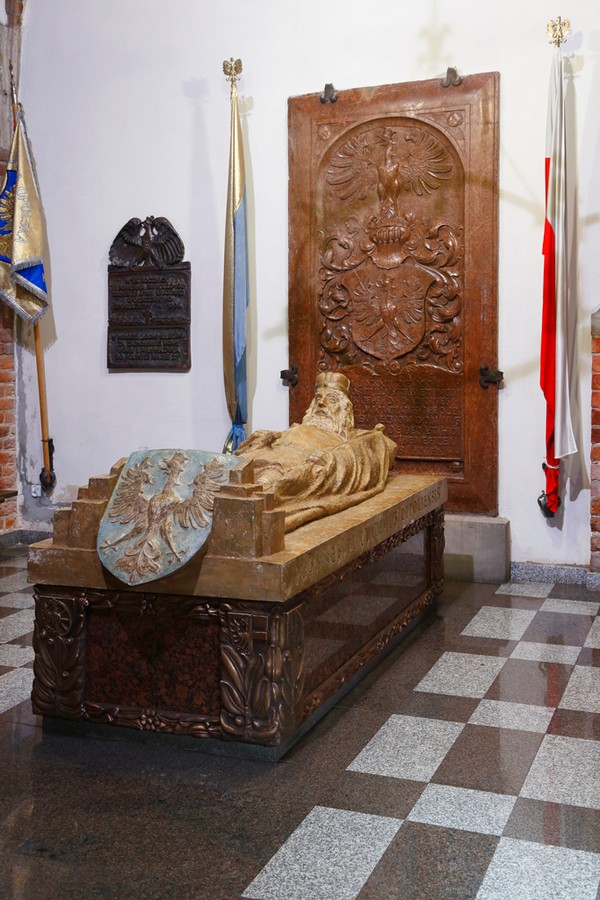 Everyone who peeks into the Piast Chapel may set off on a real journey through time to the prehistoric Opole of the Piast dynasty. Raised at the turn of the XVth and the XVIth century, it was originally called “The chapel of the Holy Trinity”. There is a stone sarcophagus of the late Duke Jan the Good, the last descendant of the Opole Piast dynasty, who passed on March 27, 1532. The Duke left his duchy without a successor. His wish was to be buried in the Opole collegiate church and he is the only one from the Piast dynasty who rests in this temple. The rest were buried in crypts in the nearby Franciscan church.

Why are the remnants of the Duke Jan laid in the collegiate church? It’s because he was the one who made an effort to restore the temple after one of the biggest fires which had been destroying the temple. Due to his support, we can admire the size of collegiate church which was expanded during his reign. He was the one who made Opole proud of its cathedral. Thus, he was buried here with all the due respect.

He was rested in a lead coffin with ducal insignias: a sword and a blue and yellow banner of the Opole Duchy. Due to Count Johan von Oppersdorff effort, a tombstone was build over his grave. The tombstone was covered with a disc made of a red marble. There was a renaissance epitaph with a coat of arms of the Opole Piast dynasty placed on the top of it. There is also an inscription in Latin which says: “On March 27, 1532, the glorious and famous Duke Jan, the last Silesian Duke of Opole, Głogówek and Racibórz, highly religious and bountiful towards the God and the people, died. Amen.”

What is interesting is that originally the place Duke Jan rested was in a different place, under the floor of the main nave, in front of the sanctuary. It was discovered in 1985 during a renovation of the floor which was kept in secret from the Communist government. The work was carried out over several or so nights behind the closed door of the cathedral. In the morning the place was cleaned so that nobody got suspicious. The remnants of Duke were located thanks to the analysis of the protocols from the XVIIth century and one old … aquarelle, discovered in 1968,  depicting the interior of the cathedral. However, the research was put off to another time. It was noted that the sword, the banner as well as the ducal insignia were missing and the remnants had been laid not in a leaden but a wooden coffin. According to the historians, the insignia and the coffin were probably stolen by Swedes during the Deluge and molten for the military purposes.

The exhumation and the removal of the duke’s remnants took place as late as in 1999.  It was just after the region was flooded with a wave of protests against the liquidation of the Opole province resulting from the administration reform. The parish priest of that time, the prelate priest Stefan Baldy promised himself that if the province survives, the duke will be buried in the Piast chapel in a new sarcophagus.

The Provence was preserved and the prelate priest Baldy kept his promise. The renewed burial took place on June 19, 1999. However, before that happened, the remnant of the priest – 266 bones were first carefully examined. Thanks to that, we know that Jan the Good was 170 centimeters high and died at the age of 70. The cause of his death might have been severe flue. However before that, he suffered from arthritis and rheumatism.

But the Piast Chapel hides more treasures than the tombstone of Jan the Good. There is also a huge baroque painting from the XVIIIth century depicting the genealogical tree of the Piast dynasty. According to the recent findings, it is a piece of art created by Johan Christher Lischki in 1711. It illustrates not only the names and the coats of arms of the following dukes but also their portraits. The genealogical tree presents the connection of the Opole Piast with the Polish rulers, starting with the legendary prince Popiel, Siemowit, Leszek and Siemomysław, through historical rulers of Poland such as Mieszko and Bolesław Chrobry and finishing with the already mentioned Opole duke Jan the Good.

There is also one more thing which is worth attention.  It is a late gothic triptych from Kostowa, 1519. There are three female figures in the middle of it: Virgin Mary holding baby Jesus together with Saint Barbara and Katherine. The side panels of the triptych illustrate John Baptist and Saint John Evangelist. When shut, the panels reveal figures of  two apostles: Saint Peter and Saint Paul.

The Piast Chapel in the Opole Cathedral is one of the places which remind us about the centuries-old history of this land and this chapel. Undoubtedly, it is a place worth exploring …